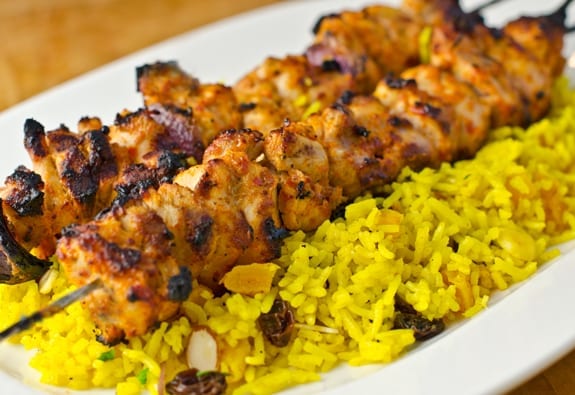 This is one of my favorite recipes for entertaining. Chicken thighs are marinated in a tangy Middle Eastern-style blend of Greek yogurt, lemon, garlic and spices, then grilled on skewers until golden brown. The kebabs are delicious over a bed of golden spice rice (like the picture above) and many type of combinations.

Kebabs are various cooked meat dishes, with their origins in Middle Eastern cuisine. Many variants are popular throughout Asia, and around the world.

In most English-speaking countries, a kebab is commonly the internationally-known shish kebab or shashlik, though outside of North America a kebab may be the ubiquitous fast-food doner kebab or its variants. In contrast, in Indian English and in the languages of the Middle East, other parts of Asia, and the Muslim world, a kebab is any of a wide variety of grilled meat dishes. Some dishes ultimately derived from Middle Eastern kebab may have different names in their local languages, such as the Chinese chuanr or rou chuan (Mandarin).

Although kebabs are often cooked on a skewer, many types of kebab are not. Kebab dishes can consist of cut up or ground meat or seafood, sometimes with fruits and vegetables; cooked on a skewer over a fire, or like a hamburger on a grill, baked in a pan in an oven, or as a stew; and served with various accompaniments according to each recipe. The traditional meat for kebabs is most often mutton or lamb, but regional recipes may include beef, goat, chicken, fish, or anything you may think of.

For this recipe, we will be using chicken instead and will be a match for spice rice which will featured here!

Feel free to browse more recipe here, all at makanan.club.