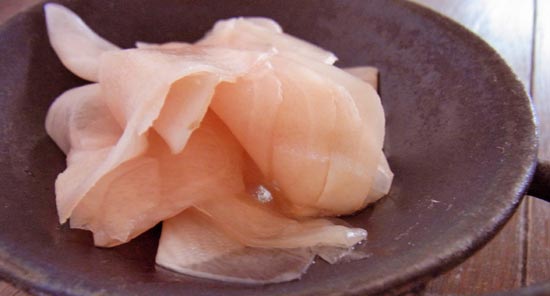 It's served with sushi or sashimi and eaten between different kinds of sushi.

Pickled ginger, or sushi ginger, is called ​gari or shin-shoga no amazu–zuki in Japanese. It’s served with sushi or sashimi and eaten between different kinds of sushi. The ginger’s spiciness and sweet vinegar flavor cleanse the palate in between eating different pieces of sushi, allowing you to enjoy different kinds of fish and rolls. It’s also great with century eggs, which are a Chinese delicacy. You can find prepared pickled ginger in pink or white in most Asian markets but here’s a simple recipe to make your own.

The secret of this pickle is – only use young ginger

Young ginger is harvested and sold in early summer. It has a mild ginger flavor and a fine fleshy texture that is tender, unlike matured ginger usually used for cooking. Look for ginger with the pinkish tips in an Asian grocery store. This pink pigment makes the pickled ginger naturally pink. Some of the commercially produced and sold pickled ginger is artificially dyed, but you should be able to find some brands that avoid the artificial coloring.

The young ginger’s skin is very thin and easy to peel with your fingers or a spoon. It’s thinly sliced and then marinated in sugar and rice vinegar mixture 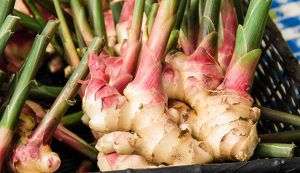